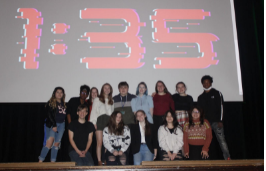 For the last 40+ years the drama club has held a play in the auditorium during the fall, which has been directed by Mr.Hoyt, but 2020 the pandemic hit. COVID-19 caused the closing of many schools, therefore the cancellation of many events, activities, sports, and many more. Hoyt understood that there was a pandemic going on and everybody needed to stay safe, but he was upset with the idea that a group of talented students would not be able to participate in the play, musical, or any drama club event, so for 2020-2021 he came up with the idea of performing a play and musical through screen using zoom. This worked well for online learning, and then all schools opened up for the 2021-2022 school year, but with some restrictions, so there would be yet another year with some parts of school missing. Yet Mr.Hoyt always finds a way to make all his students, Freshmen-Seniors, get a chance to participate, and be able to attempt new things. So for the first time every Joliet Central would host a film fest for the premier of a movie! The script for 1:35 had been written eight years ago, which Hoyt had planned on using, but never got a chance to, until now! How was the cast able to shoot with all the COVID-19 restrictions? Most of the cast says that they got to use clear masks, which was not really the most comfortable, but they worked well for the director, since he wanted the audience to be able to see their faces. All cast members have full trust in Mr.Hoyt, and they all say that he is very easy to work with, and does not treat them as students who are just in a school club, but he treats them like actors/adults, and is very professional with all of them. Everybody had fun working on the movie, and the audience enjoyed watching the silent films, short films, and 1:35 so it all paid off!